Judge - Lords of the Fallen


The Judge is a Boss you face in Lords of the Fallen.

Strategy For The Judge

Fighter Class Strategy: Judge moves fairly sluggish and most of his attacks can be dodged by mid-rolling and even slow-rolling. You will also have plenty of time to observe his basic "bread and butter" attack patterns and telegraphs before you grind him down to his one and only health bar marker. The fight to that point is pretty straight forward but varies a little based on what weapon type you fancy. In his "first form" most of his attacks can be blocked without any life loss from a regular 100% physical absorbing shield with decent poise. The only attacks that are unblockable at this point is his ground slams which generate an AOE shockwave and hits for moderate damage depending on which type (Light, Medium, or Heavy) of armour you are wearing.

A safe way to make sure you take minimal damage in this phase is to bait his "Right-Left-Slam" attack. Just back away from his face when he revs up the punch combo and roll away when he goes in for the slam. Do not roll to the side if you are locked on him since that will result in you rolling in directly behind him and ending up taking damage from the AOE ground slam being sent flying backwards and missing your window to attack him. After the slam, run in and swing at him 1-3 times depending on your weapon's attack speed. With a sword you should be able to get 3 hits in, with an axe or a club about 2 hits, and with a large weapon such as Great Sword, Pole Sword, Great Axe or Great Hammer your window will be 1 hit. Don't get greedy because his follow up will either be a single ground slam which you will not be able to block, or another series of blockable swings which you will want to have some stamina left to block or dodge away from.
Rinse & Repeat until you have him down to his life bar marker.

This is when the real fight begins.  When the second phase begins, Judge library of attacks will vastly expand and he will become quite deadly if you drop your guard. The most relevant attack in his expanded arsenal is when he summons Infected and retreats to the top of the Citadel. He will telegraph this attack by raising both hands in the air and a green smoke will emerge from his body. This is a great window to go Zerg on his ass and get as many hits as you can on him before he retreats to the to the Citadel balcony. He will not do any attacks in between summoning Infected and running for the Citadel, so that is a pretty decent window to slap him around for a bit.

The crux is what now follow. So, he raised a bunch of Infected. Not a big deal, right? WRONG! The god news is that the infected themselves should be no problem for you to take care of. The bad news is that Judge will send trails of fire at you while you try to deal with the infected. The fire trail will always come at you from behind, and it deals a HUGE amount of damage if it hits you. It will also set you fire for a quite hefty fire DoT. (Fire protection shards will mend this a little, but not enough that it is worth it to "ass-tank" the fire trails. This means that just running around to avoid it won't do you any good since no matter which direction you run the fire will always come at you from the back. The best thing to do here is to lock on to an Infected and then strafe to the side.

By doing this you always stay in control of where your back is turned and constantly side-stepping will make it so that the fire trails will miss you. Ok, so you deftly manage to avoid the fire, what now? Well the good news is that the fire trail also can damage the Infected if they end up in its way. The bad news is that you NEED to get rid of all (at least MOST) of the Infected before Judge comes down from the citadel balcony. He will jump back down shortly after firing his 3:rd fire trail at you. At this point he will absorb the HP of the Infected who are still alive, regaining potentially all the HP you managed to grind down in the cycle before he did the attack. This can be very frustrating, especially if you are using a low damage weapon and got some bad luck with his attack patterns before the summoning.

The best way I found for dealing with the Infected quickly was to try and lock on one of them and then try to herd the rest (They will be going after you) in to a pile around the center of the arena and let Judge's fire trail deal with as many of them as possible strafing out of the way, and right after fire trail number 3 do my best to clear out the ones still left standing.
For the second phase he will also start doing a bunch of other attacks in between summonings. Still, the plan is the same. Stick to it! Avoid his attacks regardless of what they are, and just go in for the window after he slams the ground. Also go nuts on him when he revs up the summoning attack.

If you stick to the plan, and stay on your toes while killing most of the Infected he summons you should be home free. It might drag out, but slow and steady wins the race.
Something that will help greatly is to put a Flawless Poison Rune in your weapon. DoT works wonders on him, and most bosses in the game. It can cut the boss fight time in half.

Personally I used a great axe called "Ceremonial" witch had 2 rune slots. I used a Flawless Poison Rune, and a Flawless Power Rune. (I put my god-rune in my armour). For shield I used a kite shield with 3 rune slots in which I had 2 Flawless Luck Runes which decrease the amount of energy drained from blocking by 9% for each rune. In the third slot I had a magic rune which was not really useful for this boss fight really.
The great axe proved awesome on this boss though. During the regular attack windows, do a running R2 attack and then roll away. With a proper STR build it should do roughly 300 dmg plus lingering poison DoT. When he is revving his summoning attack one could easily whack him for over 1k dmg plus DoT. The fight should take about 10-15 minutes then.

[EASY STRATEGY] For those that keep getting killed by the fire attacks.
First of all, try to stay near the part where he jumps up. After dishing out tons of damage when he starts the green patch attack, run with him towards the little gate/door and face it. Then, quickly press backward on the thumbstick/keyboard so that your back is directly facing the gate/door and hold up your shield (in case his minions attack you). The fire trails never hit you and you can get in massive damage when he lands. 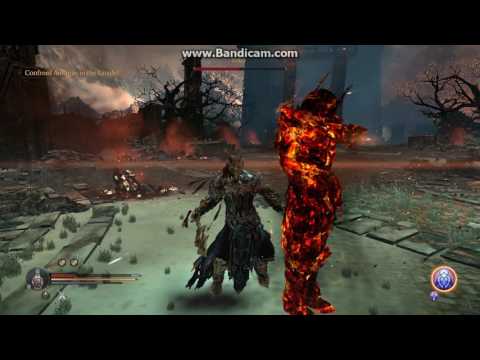 Attacks For The Judge

Notes and Trivia For Judge