Keystone Citadel is a location in Lords of the Fallen. This area is the main reinforcement of the area. 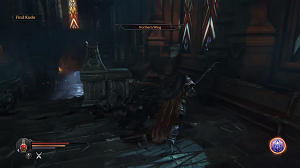 Once inside the Keystone Citadel, your main path is up all the levels to the top of it, where Antanas awaits you. On your way you will meet the Guard Captain once more

26 , and when you reach the circular staircase, there's a lift on top of it

Kaslo asks you to clear out his Planetarium, from the Rhogar. It is back inside, one floor down from the elevator

29 . Once the Planetarium is clear, your main quest is updated - Kaslo and Antanas explain your next task, which is bringing the fight back to the Fallen God. You are to return to the Abandoned Temple, kill the remaining Rhogar Lords and then face the god. Once you leave the Citadel through a big doors

37 , a huge beast will break free from the chapel on the Square of the Judges

10 in the Keystone Monastery. After killing it, a guard will appear and ask for your help. At this point you can either explore the Citadel and the outside of the Monastery for a few sidequests or proceed to the Abandoned Temple.

Here you will have to face the Lost Brothers boss

34 before you meet Guard Captain again

35 . Head towards the Solitude

28 , where you met Antanas for the first time. On your way there you will meet Crafter

36 who will help you make use of the rune Adyr gave you. Save the game, because what awaits you upstairs is your final battle.

After completing the Catacombs, you will enter the Keystone Citadel in the Flooded Halls. There will be a checkpoint immediately inside and some stairs. Head up the stairs and pick up the lore, New Disciple immediately to your right. Kill the First Warden enemy and pick up the Human Skull from the loot shard on the left. There is a Blacksmith Station and a door up ahead. Head through the door and up the stairs to the Main Hall.

Kill the Rhogar enemy and pick up the lore, Judge Disciple. Head up either stairwell and kill the enemies there (be careful, there is a nasty wizard at the end of the hall and two enemies will spawn behind you). The first door on your left contains 2 lore, Old Priest and Join Me. The next door on the left is a sealed rune door and contains a chest that is locked and requires the Main Hall Key, which you will find much later in the game. The room on the right is gated and will open later in the game *the key is actually accessible early on in the game if you shield bash through the breakable wall (it provides a tutorial for this) in the first map after defeating the first boss fight - it is difficult area early due to many corrupted spiders that drop down*. Pressing on you will fight another First Warden and a Rhogar. Pass the locked gate on your left and head into the Inner Chamber.

Kill the large Rhogar with a shield and pick up Gargoyle and Hawk from a loot shard near the statue on the left. Head up the stairs and kill a couple more Rhogar and speak with the Guard Captain. To his right all the way over is a lore, Angry Priest. The door on your left contains the Injured Monk (if you helped him) and the lore, The Rebel. If you speak to the Monk he will ask you to clear out his laboratory in the Southern Watchtower (where the Large Spider is early in the game). The room on the right contains injured soldiers and a breakable wall that contains the Will Armor Set. Forward there is a lore, Books and stairs leading up. Head past the soldier to the checkpoint and Blacksmithing Station and then go up the lift to Anatans. Be sure to grab the lore, I Swear to Her while you are up there.

Head back down the lift and then down the stairs to where the soldier was. Head through the now open door and kill the enemies below. There will be 2 locked chests in this room that will open with the Planetarium Chest Key (you will get this much later in the game) and one chest that contains the Harmony shield. Head to the right and kill the two Rhogar there and open the chest at the back right of this room to acquire Dimensions Armor Set. In the next room there are more enemies, a locked chest, that also opens with the Planetarium Chest Key and a locked door that opens with a pressure plate. Head back to the first room in the Planetarium and go left now. Use Prayer on the pressure plate and run back to the locked door to find the Blessing Armor Set. Up the stairs is one last First Warden (BE VERY CAREFUL TO NOT DIE AT THE SAME TIME AS HIM OR YOUR GAME MAY BUG AND YOU WILL NOT BE ABLE TO CONTINUE). After speaking with Antanas and Kaslo head back down towards the Flooded Halls, and shoot the large door with the spinning blue seal with your Gauntlet. Open it and head into the Square of the Heroes.

Square of the Heroes

Once in the Square of the Heroes, moving forward a little will trigger the Beast boss fight. You can use the [[@Shard of the Heroes] during this fight (if you haven't already) to acquire 1 of 3 weapons. After defeating Beast pick up Stain and a Big Sealed Rune. An NPC will appear behind where you came in and he will ask you to help him with a quest inside the Citadel. The Planetarium Piece is in a loot shard next to the NPC. You will give this to Antanas shortly.

Head to the Southern Watchtower and head down to where the Large Spider was there and speak with the Injured Monk. He will ask you to give him Tyrant Hearts. Give him the 4 you have and he will upgrade your Health Potions. You can bring him up to 10 and he will further enhance them. Head back to the Keystone Citadel and go in the large door you came out to fight Beast, go up the stairs and go in the first door on your right to the Old Quarters.

Kill the enemies and break the breakable wall on the right side of the room. Head into the next room, kill the enemy and use the pressure plate next to the Dimension Portal to open the locked door inside the room you opened with the breakable wall. You will acquire a Spell Point Shard and a Poison Resistance Shard. Head back towards the Dimension Portal, but go down the stairs instead. Kill the enemies and pick up a Human Skull. Head down the stairs to the left and pick up Curse from a loot shard.

Then head up to the Main Hall and speak with soldier NPC outside the Initiation Room. Head inside andd kill the monster. Be careful as he isn't one you have faced yet. Return to the soldier and speak with him to acquire 7500xp. Head in to the Northern Wing.

Kill the enemies and head down the stairs and the next set and go through the door at the bottom. The room on to the left of this room has a breakable wall. Break through it and pick up the loot shard containing Cellar Small Key.

Heading into the next room there is a locked door in front of you, which opens with the Cellar Key (you will get this key later) and a Large Spider to your right. Kill the Spider and head straight ahead and kill the Rhogar. Pick up a Human Skull and kill the next Rhogar. Pick up the lore, Point Three and head down to the right and pull the lever to open the shortcut to the Northern Wing ( Keystone Tutorialarea). Head through the shortcut, fight through the first couple of enemies and go up the stairs to grab the Northern Monastery Wing Chest Key on a loot shard. Head back through the shortcut and kill the Spider ahead and pick up a Human Skull. There is a breakable wall here containing an Empty Bottle. Head further down the stairs, down the corridor and roll under the gated door on your right. Pick up the lore, Dirty Work and use the pressure plate to open the locked door across from you and down the stairs to your left (first door). There is a spider outside and one inside. Pick up Needles on a loot shard and use the hanging corpse to reveal the Citadel Cellar Key. Use the lever in the corner to reopen the door. Head left and open the door at the end of the corridor on the left. There is a checkpoint here, along with the Main Hall Chest Key.

You return to the Citadel after speaking with Kaslo. Immediately behind you is a chest containing a Spell Point Shard and a Poison Resistance Shard. There is a Dimension Portal to the right, it is a challenge portal. Complete it to receive Ceremonial Axe, Attribute Shard and Spell Point Shard. Head out of the portal and face the Lost Brothers. You will get Defender for killing them. Which version you get depends on the order you kill them. Whichever brother you kill last will grant a 100% resistance shield of that type (lightning or fire) and return that damage type upon blocking.

Head into the Old Quarters and go left and kill the 2 enemies here. Pick up the lore, The Results and go up the stairs and kill the archer and go into the Dimension Portal here and loot the Lords Armor Setand Stare. Head out of the portal and go straight through the door. go right and then head left. Kill all the enemies and grab the lore Guard Orders. One of the enemies here will drop the cellar key, which can be used to open the very first door behind the hidden wall in Keystone Monastery which holds the hammer Law if you want it. Head back towards the other end of the hall. Kill the guard captain and grab The Great Burden, Antanas's Will and Southern Trench Key. 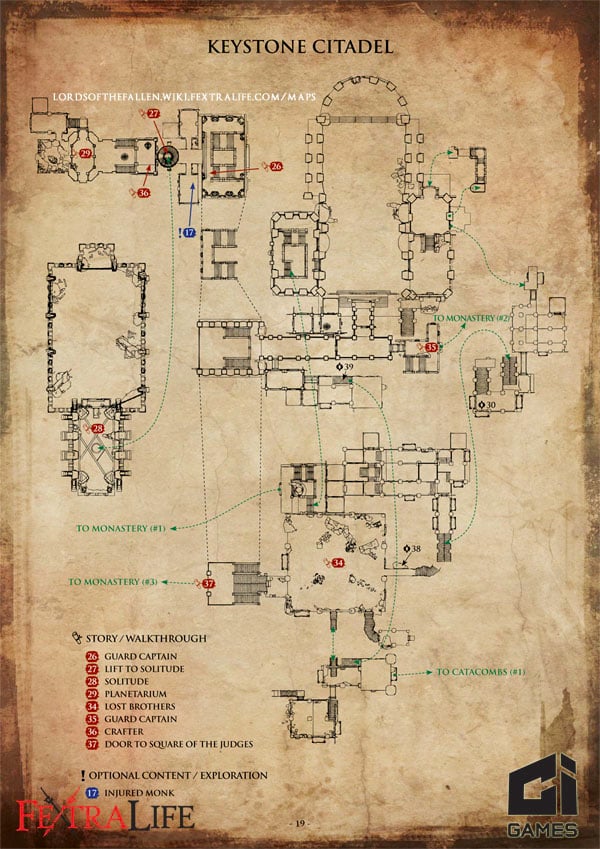